Some words to inspire you:


If at first you don't succeed,

Don't lose your confidence if you slip,
Be grateful for a pleasant trip,

And pick yourself up,
Dust yourself off,
Start all over again.
song- PICK YOURSELF UP  from the film Swing Time  1936

From try, try again to Spy, Spy Again
My first manuscript about the history of spying was rejected by the publisher. I thought my manuscript  was brilliant but the publisher thought it lacked focus. I pouted and sulked for 30 minutes then started all over again.


The people at annick press (Spy, Spy Again's publisher) steered me towards a better direction.
"Why don't you write about spy failures?" they suggested.
"Oooh!" said I.


So library books were burrowed into once again, the internet was raked over, and some super samples of spy jobs gone wrong were unearthed and shoveled up. My editor dug out several accounts of ancient blunders and tossed them into my spy pile as well. Soon, my filing cabinet (the cardboard box under my desk) was overflowing with historical research.


I wrote all about 20 spy failures and went back to the drawing board to doodle little scribbly pictures. Finally,  I had a new manuscript to show the publisher and this time they liked it.  And after many more months of illustrating and word tweaking,  Spy, Spy Again was published. Tadaaaa!!!

Advice: Practice being calm, dignified and intelligent. That way, if you get nominated for an award, you won't do this: 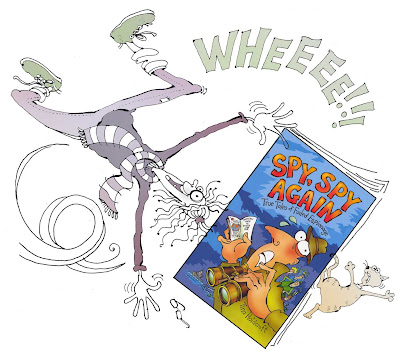 This is me, after finding out that my book, SPY, SPY AGAIN was nominated for a Willow Award 2012.

3. Research! And beware of cardboard boxes.

IMPORTANT!  Be dead accurate when you write about real people and events. Don't make stuff up! If you invent facts or copy things that other people have made up, teachers will give you bad marks and critics will sneer at you.


I carefully researched primary sources and books written by respected experts and historians. (A primary source is a document or an account written during the time that you are studying. Pictures and photographs of that time are also primary sources.) Then I photocopied all the research and slotted them into files in a cardboard box, which I stored under my art desk. 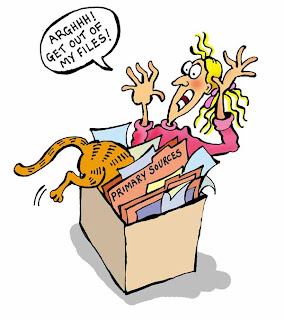 WARNING! If you have a rotten cat like I do, beware! My cat shredded chapter three's research for Spy, Spy Again. (He does a similar trick with rolls of toilet paper.) But it could have been much worse. A former cat (he'd dead now- no I didn't kill him, he died of old age) thought that a box of my beautiful watercolour art was a kitty toilet.

2. What makes you drool?

How do you choose what to write about or draw? You'll do a much better job if you enjoy the subject so choose something that interests you.  I love history, humour and the sneaky arts of espionage. They make me drool. What makes you drool? 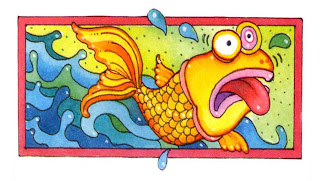 Here's some great ADVICE. Don't eat crayons, lick paint, chew erasers, suck on brushes or drink the ink. There you have it.  Aren't I nice for passing along such wisdom?
Home
Subscribe to: Posts (Atom)